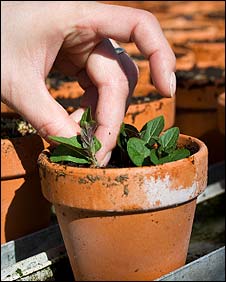 Sweet and rather apt magazine piece on “pottering”. Starting from Monty Don’s recouperation (aided by pottering) the piece makes an opportunity for a bit of comedy (describing that modern phenomenon ‘working at home’ via the metaphor of gardening…) and a more serious point about self-directed, deadline-free work…

This is the more active version of “quality slobbing time” (QST[tm]), which is a more determined, nay total rejection of structured activity. It’s a close relative of “man time” and shares with it the temporary abandonment of personal hygiene, conversation and a balanced diet, but adds in a particular focus on some activity that other people would consider banal or perverse – eg protestations the Under Siege is the best film ever and must be watched. Again. Or channel surfing for CSI repeats.

Potterers and QSTiados will of course claim that either pastime is simply the inverse of the otherwise manic, pressured, hyper-productive Blackberry Lifestyles they lead. Of course it it.