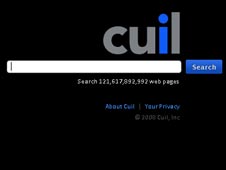 How lovely. On a hot and humid summer’s day we have someone claiming to take on google at search. Enter Cuil (pronounced “Cool” – how convenient), produced by some ex-Google staffers (although, Google’s now so big that saying “ex-google” is about as meaningful as saying “ex-schoolchild”. Still, I digress. Heat, humidity, etc).

Well, I had a quick play, and it’s certainly pretty and I like the magazine layout (in the same way I like the look of Magnolia, but still use delicious).

Unfortunately, Cuil doesn’t as yet have the skinny on search. Concepts are a neat idea (although if I were in that sort of mood I’d just fire up TouchGraph and use that as a visualisation tool on top of the google index). However, these additional facets aren’t that useful when the 120bn web-pages they’ve indexed seem not to cover the web.

In a rather painful and blunt example, dear reader, I find that I no longer exist!

Leaving that dent to my ego aside (sob) there were a number of other areas that seemed to be peculiarly skewed or absent.

This shows on the one hand how heavy web users have become habituated to Google’s way of doing things. We amend our search strings for weight, or refine as we learn jargon in a given domain or based upon initial results. I haven’t got the energy to relearn this for a “solution” that’s at best simple ‘different’ and at worst has gaps.

The challenge issued to google also forgets that the big G is no longer ‘just’ a search engine: it’s a behavioural and intelligence linking monster. From the search and click-through activity, from my google documents, notes, custom search engines, google checkout and adword activity, Google is a closed loop system of information, behaviour and commerce.

The two ways to compete imho are to wait until google implodes (in the great history of global giants, or on a 20 year cycle) or be better at something. Clearly, the latter is preferable to the former, but if you’ve deep pockets and are under 40 years old then don’t totally disgregard the first option 😉

I’m no longer enamoured of Google, but in the age of the commercial web they are the benchmark. One way not to compete, I’d suggest, would be to issue a challenge and not deliver.

Thanks to an article in Indy (Clare Beale’s “On Advertising”) I’ve seen and now downloaded the most excellent iPhone guerilla/game/viral advert. It’s the first ad I’ve seen that “works” on mobile: the Carling iPint.

The app appears on the iPhone desktop and upon launch you are given the task of sliding a ping of – er – Carling from one end of the bar to the other.

This uses the iPhone’s motion sensors to good effect, and so is a great example of device-specific planning. Tipping too far and the pint falls and smashes… Once delivered to your iMate’s hands you’re “rewarded” with a virtual pint of Carling. There’s a neat animation as the whole screen ‘fills’ with Carling, and… … the liquid ‘tips’ as you move the iphone as if to drink it. Once you’ve drained your pint you can then play again or mail the app to a friend.

All we need now for ad-based perfection is:

I’ve not seen such a well formed ad approach since the Lynx/Axe “feather” campaign.

It’s good to see this level of innovation and fun in mobile marketing – augurs so much better than blatting gifs to passers-by via bluetooth!

A couple of weeks ago I gave a presentation to the People In Aid Board on the trends in the uses of digital and social media and how these might be used to provide improved services for the charity’s members, staff, field users and stakeholders.
People in Aid is a charity to support HR professionals and practitioners. In their words:

The organisation already has a number of good web properties, but very much in the “publishing” tradition: centralised information ‘resources’ that are available ‘from the source’ – not always ideal in the field, nor necessarily reflecting the way people currently work internally.
The preparation phase allowed me to get a good understanding of the issues, challenges and opportunities faced by PIA – my thanks to Ben and his colleagues for their time and ideas. The presentation itself elicited some good questions and push-back and I’m looking forward to seeing the development of their web and digital strategies.
The slide deck is linked below, on Slideshare.net.

Google UK have convenened an interesting and senior morning on etail and ecommerce. You can see the list of speakers at the website – quite a gathering.

I’m pleased to be moderating a session on “Scaling and Managing the $1bn Online Business”. I do this with some humility since the last ecommerce business I ran (while Group eCommerce Director at Littlewoods Shop Direct) was “only” £405million. The current £:$ rate is flattering of my efforts though – $800m sounds like a lot more – but failing a slump in the value of the dollar (!) I currently do not qualify for membership of the $1bn-club. Not yet, at least 😉

Just uploaded the new wordpress iPhone app and it’s simple, impresive and quick. Posting ‘on the go’ will be less of an exercise in masochism I hope…

Between the excellent new apps for Facebook, Twitter and now blogging there’ll be a rash of on-the-road “presentism”, status updating and thoughtstreams. Ok, now I’ve scared myself. It’s been a busy time on the speaking front, culminating in a ‘double decker’ for Adobe and then Sky.

Adobe’s Scene7 folk have initiated a series of retailer briefings and, having spoken at the first, it would have been rude not to speak again when invited 😉 The topic of this presentation was “Excellence in Online Retailing”. I opened proceedings, then Ijaz and Marty shared some of the Scene7 roadmap. Michael Ross of eCommera then gave a presentation on the “The 10Ps of eCommerce“. This was a great presentation. Michael’s dry and direct delivery was really engaging and certainly brought the 10 Ps to life. I’d read these (since we published an article on them in Internet Retailing Magazine last issue – you can see the PDF here), but seeing the presentation was certainly more fun.

I’ve put the presentation on slideshare.

Then on to Sky University for an afternoon opener on “Online Selling – a customer experience”. The day was organised by Sky for their top teir affiliates and my session was an opportunity to take a broader look at the customer landscape. It was also a good opportunity for me to ponder further the affiliate landscape – an area of increasing interest to me, to which I’ll return in later posts.

A real eye-opener for me though was a presentation from Joost de Valk, a search strategist at OnetoMarket in the Netherlands. Joost is engaged in “white hat” SEO (ie legal, well-behaved, effective SEO activities) for some major brands. Joost also knows a lot – from hearsay, no doubt – about “black hat” SEO: the sort of activities for which the word “naughty” was coined. I spend a bit of time working with client teams to improve their SEO, but I had no idea of the scale, complexity and cunning of the operations attempting to outfox Google, searches and credit-card owners. It’s an area I need to look at! Hopefully, with Joost’s help rather than a DIY remedial course in high-contact, combat SEO!

Here are my slides on Slideshare:

Mr Grumpy helped make the picnic and we “sped” the 3 hours of nose-to-tail traffic to Farnborough, finally coming to rest with 61,000 other cars in twelve playing fields’ worth of parking, over 2 miles from the gate. Joy.

After that, things turned miraculously fun. There was an efficient bus straight to the air show that took 10 mins. That was painless. Vicky’s then booked us into the “Diamond Pavillion” – a fenced off bit of grass with (joy) deckchairs, (elation) a little cafe/tent and (ecstasy) decent portaloos – ideal for incontinent kids!

We were also in ‘just the right place’ and got a fantastic, if noisy, view of all the flights, including the weird practice of waving at the pilots as they taxi after landing.

Leaving aside that most of the planes were designed to kill lots of people, the flying was spectacular and the noise was a gut-thrumpingly tremorous bass smack: the kids (with their earplugs in, of course) were transfixed.

I managed a good kip while Vicky took the kids to the playground (all free) and then we left finally about 7pm. Rather than sit in another queue we played frisbee and had a second picnic in the (now emptier) fields and then had a lovely cruise back home in an hour.

Tips for next time: leave super-early and get there for 1000; take a portable bbq and plan to have supper there too; pray for sunshine and a fresh breeze!

In all, then, a surprisingly good day out, with my very low expectations totally reversed.

This first appeared as an article in Internet Retailing magazine’s July 2008 issue. A pdf of the magazine article is attached.

The inaugural meeting of the European eCommerce Forum (ECF) was held in Amsterdam in April – the culmination of four years of conversations with leading retailers. Ian Jindal and Joris Beckers, co-founders of the Forum, reflect upon the genesis of the ECF, the pressing issues in ecommerce and the next steps for the Forum as preparations start for the next meeting in London this October. END_OF_DOCUMENT_TOKEN_TO_BE_REPLACED

This was my Editorial from the July 2008 issue of Internet Retailing magazine.

The paradigm of the web channel being a vast shop with elastic walls has run its course. As Ian Jindal packs his bucket and spade for the summer holidays, he considers a new etailing paradigm: active selling in the network age. Retailers have managed the web for too long – our customers want it back! END_OF_DOCUMENT_TOKEN_TO_BE_REPLACED

Honesty? a boast? Or a case of unfortunate product naming?

The image is safe for work, but the title may cause problems with your firewall…

Let me know of any other unfortunately titled products…